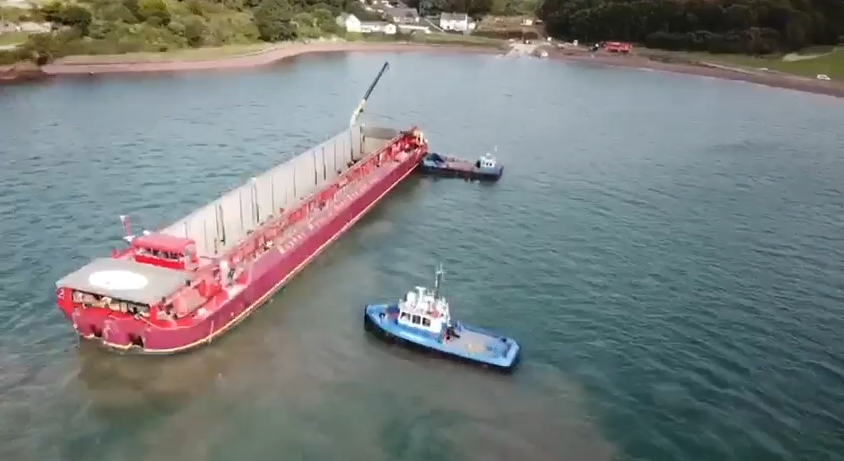 One of the unique aspects of Williams Shipping is our capability on both land and sea. A large project for ALE last month drew on this specialist expertise.

The former Murco refinery at Milford Haven has been undergoing works to convert it into a petroleum storage and distribution depot since 2015. Parts of the dismantled facility needed to be removed, with some destined for reuse overseas.

The first stage of the job was for Willpower to tow the Terra Marique from Hampshire to Pembroke.

Terra Marique is a vessel with unique beach landing and cargo loading features, making it possible to load the vessel from a wide range of quays and coasts. While Terra Marique does have its own engines, when it comes to travelling longer distances it is usually faster and more economic to be towed by a workboat such as Willpower. With a free running speed of 12knots and bollard pull of 28.4t, Willpower is often used for these types of project – earlier in the year she was used to bring the new Red Kestrel ferry to Southampton from Liverpool.

Meanwhile, 6 Williams Shipping trucks with flatbed trailers had relocated to Pembrokeshire. They spent two weeks shuttling multiple sections of equipment between Milford Haven and a nearby beach.

Terra Marique was manoeuvred onto the beach by Wilanne and Wiltango in a precise operation you can see in the video below.

The trucks were subsequently unloaded onto the barge, which was then towed away from shore by Wilanne to be unloaded onto a larger cargo ship.

Timing and efficiency were vital on all sides to keep the project on schedule, as Terra Marique’s movements needed to be matched with the tides.

The entire project lasted approximately 3 weeks. Willpower remained in Pembroke to tow Terra Marique to its next job.